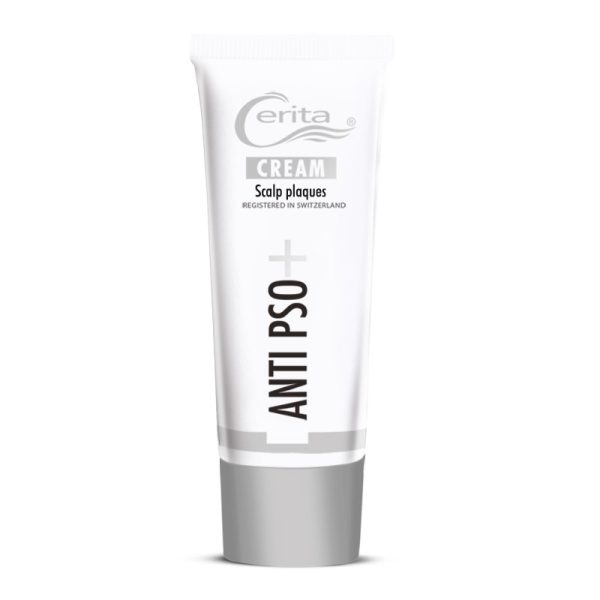 Cerita ANTI PSO + cream is for the treatment and control of psoriasis disease. This product consists of components and ingredients that by efficient mechanisms treat and eliminate symptoms of psoriasis like (itching, redness, inflammation, swelling, peeling, skin plaques)

Cerita anti Psoriasis cream reduces disease symptoms by normalization skin cells production and maturation. This cream improves skin’s protective barriers function by activating the skin’s own repair system and also it reinforce the skin so that it losses less moisture. Anti-inflammation complex of Cerita anti psoriasis cream, by efficient mechanisms inhibit skin inflammation and thus causing relief problems such as redness, itching and swelling of the skin. The extract of chestnut leaf and green tea in this complex, inhibit the release of histamine and control cytokines synthesis by immune cells. Epigallocatechin gallate in green tea reduces release of IL-8, also it controls the activity of NF-kB which is an inflammatory factor, resulting in less inflammation, redness and itch of the skin is controlled. Alpha bisabolol is one of the herbal extracts in this compound and inhibit other inflammatory cytokines such as IL-1 and LTB4. Flavonoids in the extract of calendula like apigenin prevent the release of arachidonic acid from cell membrane by inhibiting phospholipase A2 activity and block the cyclooxygenase and lipoxygenase pathways so that the synthesis of the inflammatory mediators like prostaglandins and leukotrienes will be controlled. Salicylic acid in this cream has multiple functions. It has keratolytic effect that helps to fall the dead cells and do peeling on the surface of skin, and it also has anti-inflammatory effects. Cerita anti psoriasis cream has some methods to lessen the dryness of the skin. First way is skin moisturizing by moisturizer complex in the cream. Hyaluronic acid in the cream which is also in natural skin has high tendency to combination with water molecules so has important role in skin moisturizing. Hyaluronic acid helps to remove wrinkles of dry skins. Moisturizing complex of Cerita anti psoriasis cream regulates osmosis balance of skin and has 24 hours of hydration effect. The urea is another component of this complex which has natural moisturizing effect and keeps the balance skin fat-moist and prevents losing water of skin. The oils which are in the cream have important role in relieving dryness and reinforcing the skin. The argan oil has high amount of vitamin E, stimulating regeneration of skin cells and make skin elastic so that it becomes smoother and fine. The aloe vera extract in this cream also causes skin renewal and gives freshness to it. Another effective ingredient of this cream is zinc. Zinc has very important role in skin health. One of the functions of zinc is its effect on cell metabolism. This material has important effect on skin enzymes. These enzymes are alkaline phosphatase and matrix metalloproteinases. Zinc also has antimicrobial and antifungal effects. Psoriasis sometimes accrues with fungous diseases like dandruff and seborrheic dermatitis. They often make psoriasis worse so the zinc kills the fungus on the skin and helps skin to get better. Vitamin complex in the cream has important role in making skin to return to its normal condition. As a matter of fact vitamin A regulates the duplication of epidermis cells and prevents from gathering of keratin and additional dead cells on skin surface. Vitamin E in the complex has antioxidant effects and prevents from oxidation of unsaturated fatty acids on skin. Vitamin D helps to regulate in duplication and differentiation of keratinocytes

Cream should be applied evenly on the skin 2 times a day (skin should be clean and dry before usage).